To explore the full set of age-related legislation in the area of Social participation,
you can download the PDF or the Excel version. The full data set for all thematic areas is also available for download.

The legislation regarding social participation varies significantly across the region, particularly in the spheres of marriage and sexual relationships. The region spans countries that permit same-sex marriage and those that punish homosexual acts with imprisonment, but there are clear trends and similarities amongst countries in the same geographic sub-region.

Broadly, the CEE/CIS region is in line with international standards in terms of heterosexual marriage and equality between the sexes in most countries, with only a couple notable exceptions that permit marriage lower than the recommended minimum.

In the region, the age of consent was rarely explicitly stated as a positive age at which children are permitted to engage in sexual activity, but mostly defined in criminal legislation as the minimum age at which sexual activities between or with a minor would not automatically lead to prosecution. The only anomaly in this category is Belarus, which sets a higher age of consent to sexual activity than the minimum age of heterosexual marriage with consent. Across the region, the age of consent is equal amongst males and females for heterosexual and homosexual sexual relations – though rarely distinguished in legislation – except for the specific cases where male homosexual acts remain illegal, such as in Uzbekistan and Turkmenistan.

A majority of countries do not have any specific legislation on same-sex marriage, often meaning that same-sex marriage is not possible. According to ILGA, the only country in the region to specifically permit same-sex civil unions is Croatia. Interestingly, in Croatia, the only country where civil unions between homo-sexual partners are allowed, there are no exceptions to lower the marriageable age, they are not allowed under the age of 18.

The joint General Comment/Recommendations of the Committee on the Rights of the Chils and the Committee on the Elimination of Discrimination Against Women calls for a minimum legal age of marriage for girls and boys ”with or without parental consent, at 18 years. When exceptions to marriage at an earlier age are allowed in exceptional circumstances, the absolute minimum age is not below 16 years”.

In the CEE / CIS region all countries but two have set the minimum age of marriage, without parental consent or authorisation of the court at the age of 18 for boys and girls. In Turkey the age is set at 17 for both boys and girls. In Uzbekistan the minimum marriageable age without parental or judicial consent for girls is 17 years, while it is 18 for males. This can be seen as an example of legal frameworks that reinforce, rather than challenge, gender inequalities.

In the majority of countries this age can be lowered, either by parental or judicial consent, often but not always with the explicit requirement of proving a child’s capacity. Only one country discriminates between boys and girls in marriage with consent: Albania. Here, a female’s marriageable age can be lowered to 16 with the consent of her parents or the court, while it remains at 18 for males.

In the region, Ukraine and Belarus are the only countries to permit marriages under the age of 16 years. In Ukraine, males and females are allowed to marry at 14 years: “Upon application of a person that has attained 14 years, a court may grant him/her the right to marry if it is found than such a marriage satisfies his/her interests” (Family Code of Ukraine 2002 Article 23). In Belarus, boys’ and girls’ marriageable ages may be lowered to 15 “in exceptional cases, due to pregnancy, childbirth, and in the case of acquisition of a minor full capacity before reaching adulthood” (Belarus Civivl Code 1998, Article 20) and needs to be approved by local authorities. In these two countries, marriageable ages are below the recommended “absolute minimum age” cited above.

Marriagable ages with consent – difference to without consent female

Marriagable ages with consent – difference to without consent male


What adolescents said: Views on marriage in five countries

In the consultation adolescents shared a strong desire to be protected from activities or experiences that could cause them harm, such as early marriage.
On average, 60,2% of respondents agreed and strongly agreed that no young person under the age of 18 should be able to get married. The percentage of those who agreed and strongly agreed with this perception statement decreased with age, from almost 80% of those aged 11, to 57,6% of those aged 17. 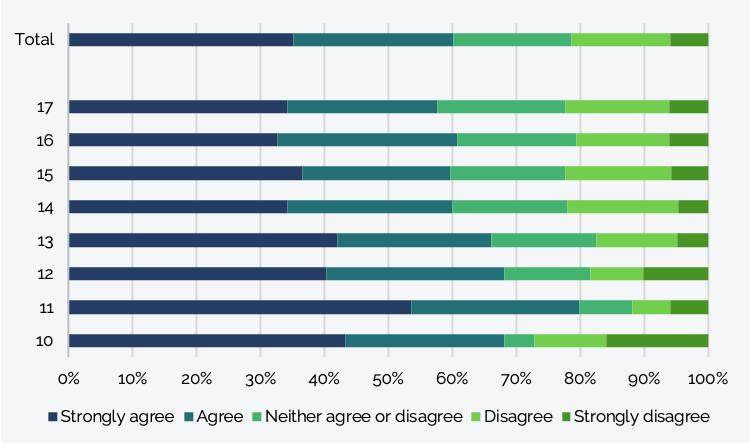 How much do you agree with the following statement? “No young person under the age of 18 should be able to get married” by age

Respondents were tested on their knowledge of when a young person could get married without the consent* of their parents. A large majority knew the correct answer, namely 18 years in all countries. The other ages selected were 16 and 15, with 7,4% and 5,7%, respectively. 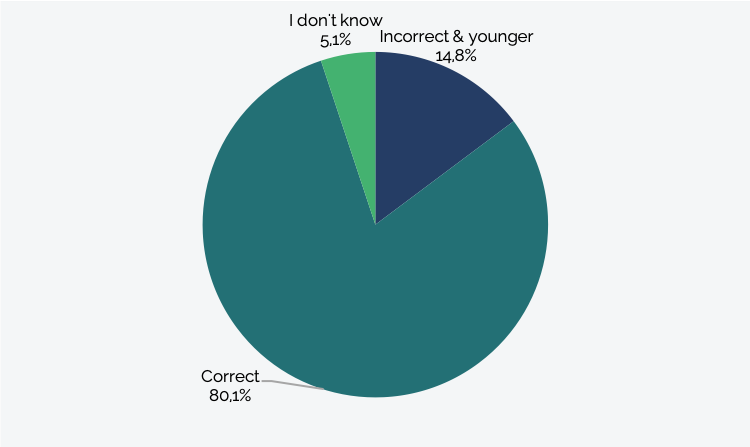 From what age can a young person get married, without the consent of their parents/guardians first?

In general, focus groups participants agreed that age 18 should be the absolute minimum age that a young person could get married. For them, marriage was a very serious decision that should not be taken lightly.

Social expectations and gender roles could compromise protection when it comes to marriage. For example, focus groups discussed how females are expected to give up career and educational ambitions to take on housekeeping and child rearing roles. Females were seen as experiencing more parental pressure than males when it comes to marriage, compromising their ability to make autonomous decisions and increasing the risk of early marriage.

“I think that a little girl does not know how to cook food yet, how to clean, for example, so I think the answer is [that she should not get married].”
— Zhasel**, 12-years old, discussing why young girls in Kazakhstan should not be able to get married in an all-female focus group of urban youths between the ages of 10 and 13
Few were comfortable with the fact that parental consent could be given for marriage at a younger age.*** This coincides with the high percentage of respondents who were against marriage before 18 years in the survey.

“Parents don’t always make the right decision. I don’t like the opinion, that if parents say something, it is always right. Parents are also fallible.

They need to take into account their child’s opinion. If a child does not want to get married, but parents force him or her into marriage, then that is it. They have to get married. But this is not right. I think again, this is a matter of different generations. Our generation is not the same, we are different.”
— Sarah**, 16-years old, discussing parental consent for marriage at a younger age in Armenia in an all-female focus group of urban youths between the ages of 14 and 17


*Note: In regards to marriage, the survey provided the following definition for “consent”: “Consent means that your parents/guardians must say ‘yes’ before you can do something”

**Names have been changed to protect the privacy and confidentiality of focus group participants. For more on ethical considerations when conducting research with adolescents, please see our Methodology.