To explore the full set of age-related legislation in the area of Political participation,
you can download the PDF or the Excel version. The full data set for all thematic areas is also available for download.

Lastly, all countries in the region have set a minimum age at which a person is legally allowed to vote and be a candidate in federal or national elections. While globally there is a near universal adoption of 18 as the voting age, there is significant disparity in the CEE/CIS region when it comes to standing as a candidate.


Participation in children’s and youth organisations

For youth organisations, the most frequent minimum age for participation is 14 years. Fourteen also is the age which

is frequently the minimum for criminal responsibility and the ability to engage in petty dealings and personal legal matters. In several countries, special rules apply for membership in political parties. Political parties can only be formed at the age of 18 in Kyrgyzstan and joined at the age of 16 in Kazakhstan and 18 in Ukraine.

Besides legal minimum ages, childhood, youth and adolescence may also be defined in policies for the respective groups. At the outset of this research, we showed that no universally agreed definitions exist for neither youth nor adolescents. This is also confirmed in the CEE/CIS region, where we frequently find definitions of youth, usually in dedicated youth policies or laws. However, national definitions vary and often differ from the global ones. Additionally, for adolescents who are at the core of this research, national definitions or policies could hardly be found. The only exception is Belarus, with a distinct definition of teenagers as those aged 14-18 (Belarus Family Code, 1999, Article 179).

Elsewhere, adolescents are typically only treated as a distinct group in the justice system, in which the term of “juvenile” is typically used, as outlined above. Also interestingly, Romania is the only country with a definition of youth starting only at the age of 18. For all other countries, the definitions of youth also include children below the age of 18.

While the right to choose one’s confession is also among the fundamental civil rights and the freedom of conscience and religion is part the Convention on the Rights of the Child (Article 14), very little information could be found for the CEE/CIS region with regards to specific ages at which children could independently decide about their religion.

All countries have set a minimum age of 18 years to vote in national elections. This is one of the few ages where there are no exceptions across the region, though these may exist for sub-national level elections, which were not explored in this research. Despite the ability of children in some countries to acquire legal capacity before the age of 18 through marriage, employment or parental consent, the age at which an individual can vote is fixed rather than dependent of majority or capacity. Hence, there can be cases in which children acquire other civil and legal rights, but not the right to take part in elections.

Additionally, candidacy age is one of the highest age restrictions for individuals, with the age affecting those with full legal capacity rather than children. Higher minimum ages for candidacy are found in the Central Asian countries of Kazakhstan, Tajikistan, Turkmenistan and Uzbekistan. Turkey has the highest candidacy age of 30 years for the elected upper house.

Adolescents were split on their capacity to engage in political processes. A little more than half (52,8%) of the respondents “agreed” or “strongly agreed” that they were capable enough to vote in national elections. 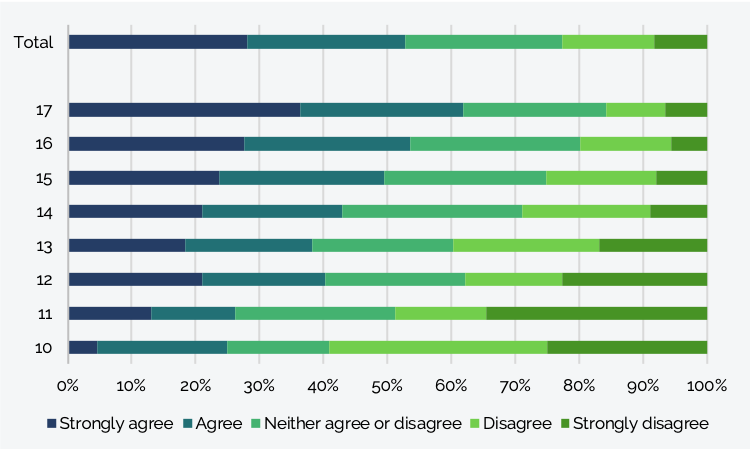 “I am capable enough to:” “vote (e.g. in national elections)" by age

In contrast, there was no majority in any age group of respondents who “agreed” and “strongly agreed” that young people in their age should be allowed to vote. 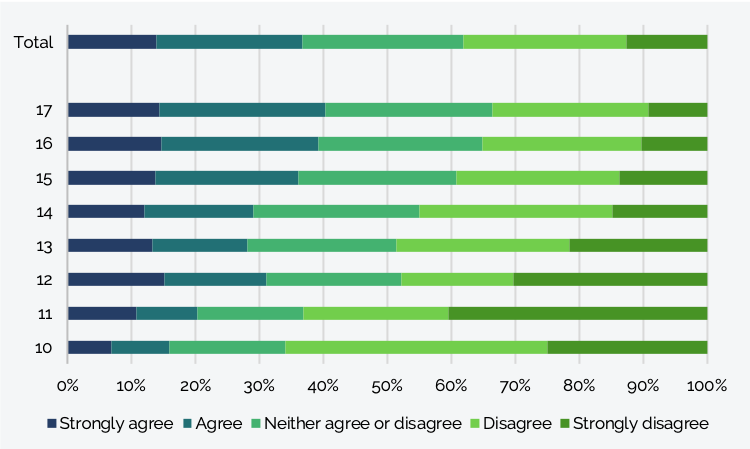 How much do you agree with the following statement? “Young people my age should be allowed to vote” by age

The difference between respondents’ feelings of one own’s capacity (“I am capable enough to vote”) and their perception of the law (“Young people my age should be allowed to vote”) may reflect that respondents see their personal capacity as higher than that of their peers. It could also reflect a feeling that while they felt personally capable to vote, they were less confident that the law should be changed to allow for this to happen.

A vast majority of respondents (almost 70%) knew the correct age at which a young person could vote in their country (18 in all countries). The voting age and the marriageable age were the only two minimum ages correctly identified by the adolescents during the consultation. 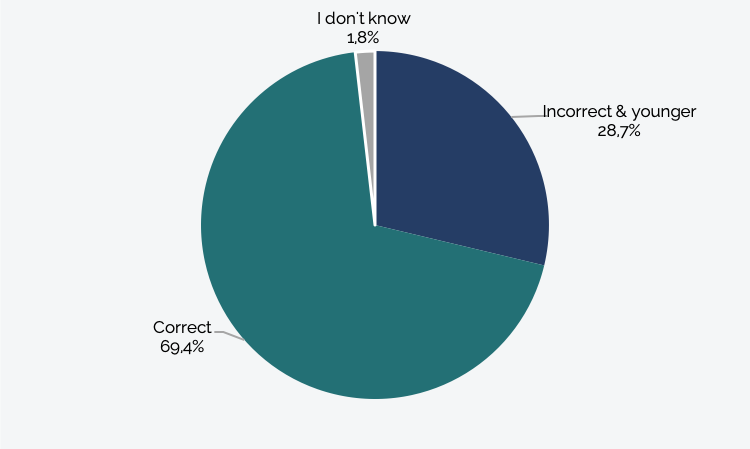 From what age can a young person vote (e.g. in national elections)?

Participants in focus groups were also hesitant to say that adolescents should be able to vote. However, some individuals who were interested in politics felt strongly that young people should be more politically involved and encouraged to do so.

“If one understands why he/she will vote…well, he/she does this consciously. If one knows that he/she will vote and not regret it later, why not let the person do this at 11?”
— Inga**, 12-years old, discussing the age at which young people should be able to vote in Ukraine in a mixed gender focus group of urban youths between the ages of 10 and 13
For those who disagreed, the reasons were numerous: politics was too complex for them to understand; voting has serious consequences and would not be taken seriously by young people; young people are not yet independent and therefore may not be able to resist the influence of elders, such as parents and teachers. This echoes the survey finding that while many felt capable to vote, they were more sceptical of actually giving adolescents the right to vote.

“18-years old is not enough, you may not have completed the first 12-years of education, you have no knowledge of politics, so you make a bad choice. After all, every vote counts, it could make a difference. So, it doesn’t seem OK to me that we can vote at 18-years old.”
— Ina**, 16-years old, discussing the voting age in Romania in an all-female focus group of urban youths between the ages of 14 and 17
Moreover, some participants were simply not interested or were disenchanted with a political system that seemed ineffective, corrupt, or unresponsive to the issues that matter to young people. One participant mentioned that if politicians focused more on issues such as education, health services for young people and youth unemployment, young people could become more interested in politics.

The Committee on the Rights of the Child has no formal position on the age for voting, but states that if States choose to lower it, it should be matched with adequate citizenship education. Nonetheless, there is no protective reason for preventing adolescents from voting before the age of 18. CRIN argues that the exclusion of young people from political processes is a major reason why their rights continue to be unfulfilled.


**Names have been changed to protect the privacy and confidentiality of focus group participants. For more on ethical considerations when conducting research with adolescents, please see our Methodology.